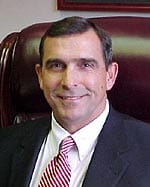 Joseph E. Boatwright is a civil trial attorney who has invested over thirty years developing effective skills in civil trial practice. He earned his law degree from The University of Florida College of Law and joined the Florida Bar in 1985.

Mr. Boatwright has excelled as a civil trial attorney and received the highest accolades from his peers. He earned the premier AV rating from Martindale-Hubbell, one of the nation’s prominent attorney rating systems. The AV peer review rating illustrates that a lawyer has reached the height of professional excellence, practiced law for more than ten years, and is recognized for their superior level of skill and integrity. (www.martindale.com)

Mr. Boatwright was awarded membership into The Million Dollar Advocates Forum, an eminent group of trial lawyers in the United Sates. Membership is limited to attorneys who have won for their client million and multi-million dollar verdicts and settlements. Fewer than 1 percent of the United States lawyers are members. The quality of the membership is impressive and includes select trial lawyers from around the country. Mr. Boatwright has demonstrated, in an objective and tangible manner, his ability to accomplish superior results in complex cases.

In addition, Mr. Boatwright has been repeatedly recognized as a Florida Super Lawyer. To determine the designations, an independent research company surveys lawyers across the state of Florida. From that survey, the top 5 percent of Florida attorneys in more than 60 practice areas are awarded the title as Florida Super Lawyers. (www.superlawyers.com)
As well as his stellar legal achievements, Mr. Boatwright has served the community of Central Florida. For many years he served on the Board of Directors of the Emmaus Counseling Center in Altamonte Springs, metro Orlando. Mr. Boatwright also served for several years on the Board of Directors of the Central Florida Chapter of the Christian Legal Society. In addition, Mr. Boatwright participated in the Redemption Prison Ministry. Along with this team of men, he served as a volunteer working with inmates in Florida’s state prison system.

Mr. Boatwright and his wife, Debi, have been married 42 years and have one son, Joshua. Of all the good things in his life, Mr. Boatwright is most proud of his wife, his son, his daughter-in-law (Joy), and his two grandsons (Jude and Ezra).

Mr. Boatwright and his staff would be pleased to meet with you and advise you concerning your legal rights. There is no charge for the initial consultation. If Mr. Boatwright accepts your case, there will be no attorney fees or legal costs charged to you, unless he makes a financial recovery for your losses.

Contact Mr. Boatwright for your free appointment. Put his thirty years of legal expertise to work for you.

Professional Associations and Memberships:
Christian Legal Society, 2001-2004  Board of Directors

Emmaus Counseling Center, 1999-2013 Board of Directors